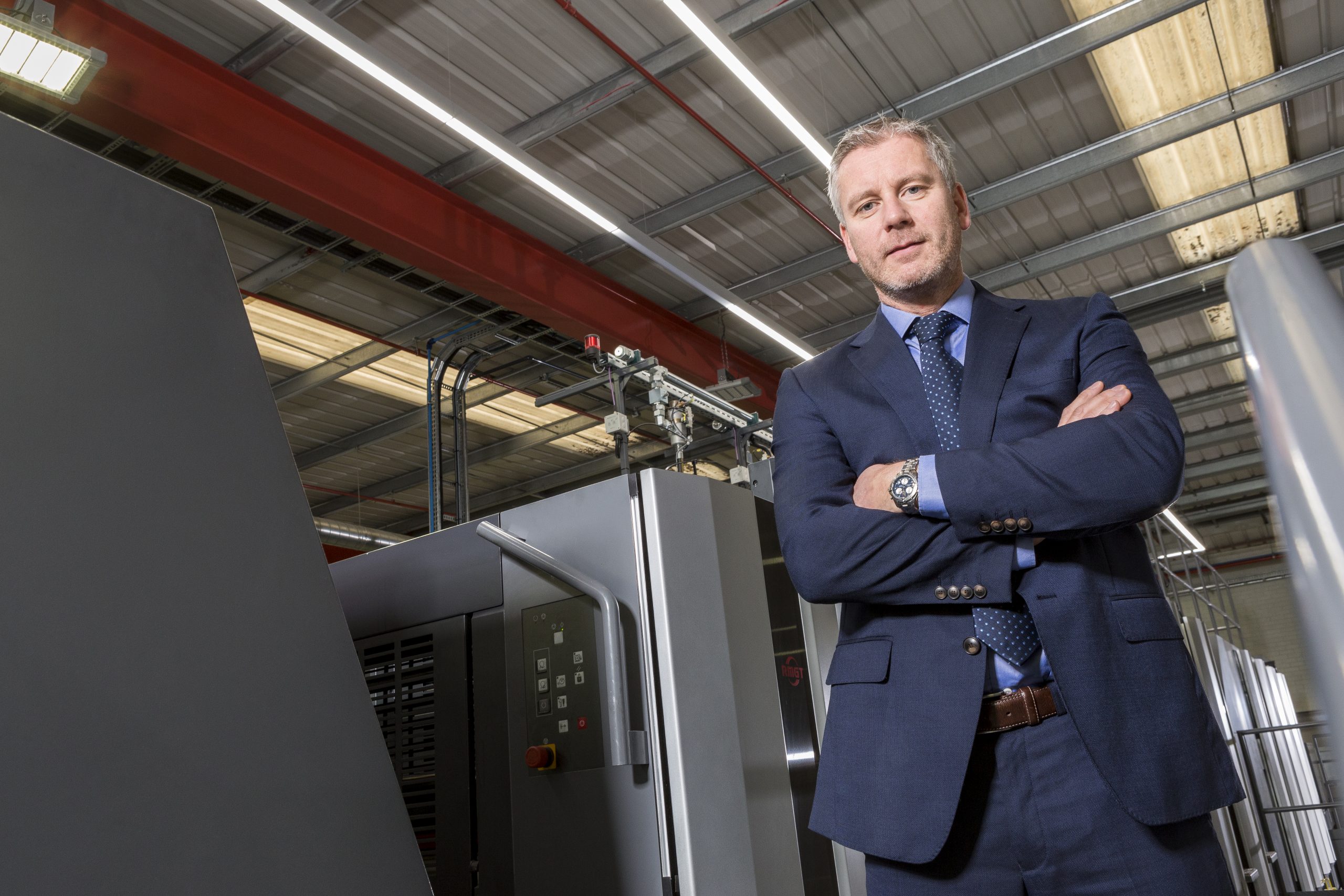 Nick spent half a day at PCP in March where he had opportunity to look around the 14 acre plant to get a real understanding of the Total Productive Maintenance programme implemented at PCP.

The following is an extract from the interview publishing in Print Week on 26th March.

When Adam Walker joined Precision Colour Printing (PCP) as head of operations three years ago, the company was busy and successful, but aware that its maintenance practices were not serving it as well as they might.

PCP, which specialises in magazine and high-end brochure work, was operating what Walker describes as a ‘run to failure’ approach: maintenance issues were addressed when something went wrong. Otherwise the equipment was in operation as much as possible. This ‘repair reactively’ culture has been common across the web sector and PCP says it can be used effectively, although it is resource-and time-hungry.

PCP has always aimed to install the best technology. It was the first business in the world to invest in a Heidelberg Speedmaster SM 102 long perfector with Inpress Control, in the summer of 2010, and last year bought Europe’s first nine-colour RMGT (Mitsubishi) 1050 Tandem Perfector UV-cured B1 press, specifically to produce a range of innovative visual effects for magazine covers.

The workhorses of the operation, however, are its three web presses, which are no longer in the first flush of youth. The company runs two Komori 38S2 webs (one 32pp and one 16pp) and a 32pp, 10-unit Manroland Rotoman. One of the Komoris is nearly 18 years old now, while the other two webs are both more than a decade old – and their need for TLC is only increasing.

Walker knew the whole maintenance culture of the business needed to change. The run-to-failure approach meant downtime was unpredictable, uncontrollable and costly. If a press went down it had serious implications for productivity and threw schedules into confusion.

A key element of the remedy was the appointment of Stuart Griffiths as process and continuous improvement manager. He and Walker had worked together before and the two set about revolutionising the company’s maintenance culture. The model they decided to adopt is called total productive maintenance (TPM).

TPM is defined as a system of maintaining and improving the integrity of production and quality systems through the machines, equipment, processes, and employees that add business value to an organisation.

In PCP’s case this consists of a set of relatively simple tools that are used to monitor and manage a hugely complex set of variables. It spreads maintenance tasks out so that machines are never down for very long but still get the TLC they need.

Griffiths outlines the basic principle: “We used to have higher than expected breakdowntime and sporadic maintenance time. The idea was, if we increase our maintenance time we’ll reduce our breakdown time but also reduce the total amount of downtime.”

TPM was implemented initially in PCP’s bindery on the stitching lines in August 2016. This had been something of a bottleneck for the business and so presented an ideal space for PCP to try out ideas and test how the system would work in a more complex press hall environment.

This began with the introduction of a system for better organising engineering maintenance, allowing the operators to highlight problems on the machine that they would like addressed during the next maintenance slot. Following this a detailed operator maintenance programme was developed. The senior operators drew up a list of tasks for each unit, measured how long each took to carry out and then created a schedule that balanced maximum productivity against expected workloads.

Griffiths explains: “We spent a lot of time with the crews, pulling all the tasks together. Roll-out was in December 2016 on the stitching lines, with 11 hours of additional maintenance assigned to each machine per month.”

The system uses a series of check sheets that set out colour-coded tasks for operators and engineers on a daily, weekly or monthly basis. As each is completed the worker dates and initials the sheet. This ensures accountability, but also means staff can take credit for their work.

Introduction of TPM in the bindery had an immediate effect, resulting in an initial 8% improvement in uptime plus an increase in overall machine speed, thanks to improved machine condition.

While print bosses might baulk at the idea of taking their money-makers offline for more than the bare minimum, it’s important to see the big picture. Walker says: “The business first thought that we were going to reduce capacity by doing more maintenance, whereas in fact we’ve increased capacity.”

At the end of 2016 PCP was ready to move TPM to the web presses. “Putting the web TPM together was actually extremely challenging,” says Griffiths. “Because it’s very difficult to work out what part of the machine we can work on, on what days.”

Walker adds: “And each activity has an impact on other activities. There’s no point changing the lock-ups, for example, if you haven’t cleaned the ducts.”

All these details had to be considered right down to the potential for “bumping bums” while working on adjacent press units.

Staff also needed to be persuaded that this strategy was going to work. Walker says: “When we started the programme on the web presses there was among some operators some resistance because previously the business had brought in third-party lean engineers to address these things and nothing really got done.

“But we don’t see any of that now because we do it now on a daily basis – and we push it and push it – and they’re starting to see results. The buy-in has been excellent.

The system is easy to tweak, too, as Griffiths explains: “If an operator says, ‘actually, we should be checking this too’, I’ll feed that into the system. So, next time I print that sheet out, there’ll be another task on it.”

And it’s the expertise of the people operating the presses that is ensuring TPM’s success. Walker adds: “If we identify a period of no work, Stuart will go down and discuss with the number one: ‘Is there anything that’s come up that’s more of a priority than what I’ve got on the board?’ As an example, they might say ‘yes, I’ve been having problems with the folder or the pins’ and we can focus on that.”

TPM gives Walker and his team the forensic tools to investigate production issues. Walker says: “The concept is complete visibility. For example, if we have a roller that has been replaced recently and it’s blown up on us, we can question the compound of the roller, how long it has lasted, why it has failed. We can do more of a deep dive post-mortem – is there an underlying fault. Because it’s all there to see. And we can manage our supply chain better.”

While there will always be unplanned downtime even with the best equipment, PCP’s goal is to achieve a Goldilocks level of maintenance – not so much that maintenance eats into production time, not too little that breakdowns do. But PCP has found that even with a fixed amount of TPM time, performance continues to improve: “We’re getting better at it; the crews are getting slicker at it,” says Griffiths.

To help continually improve understanding of the presses, PCP has a Komori web unit set up in one corner of its press hall on which workers can be trained, techniques honed and procedures timed without any impact on the actual presses.

The figures pretty much speak for themselves, but Walker says the key benefit is the control TPM gives PCP – downtime is being reduced and Walker is in control of more and more of that downtime, rather than having his press hall thrown into confusion. The extra time given over to maintenance is being more than paid back, he says.

With more structure being applied, Operations is now working pro-actively and has significantly improved control and stability.

Since 2016, PCP has doubled its scheduled maintenance – to 24hours per month – and reduced downtime hours by over 30%.

Comparing quarter four 2016 with the same period in 2017, PCP has seen a 16% reduction in unplanned downtime on its web presses and a 12% reduction on its stitching lines.

And it’s not just about the time the press is available. Griffiths says the increase in time allocated to maintenance has also increased the quality of the maintenance. “Because we put a proper structure in place, we get far more effective maintenance.”

Walker points to an instance just before Christmas, when engineers completed the reactive maintenance on one of the Komoris, as part of the TPM schedule, with time to spare and moved on to an inspection of the press as part of their proactive maintenance. While inspecting one of the dryers, the engineer found a hairline crack in an impeller, something that would never have been spotted prior to the introduction of TPM.

Walker: “We never had time to do it before because we always doing repairs during press downtime.

“Had that impeller failed in production that could have taken out a chamber, and we could have been waiting for two weeks for the parts. In fact we got the impeller out, did the repair and put it back within the scheduled maintenance period.

“We eliminated a big problem within a controlled and scheduled timeframe.”

Print quality too has improved as a result of better maintained, cleaner machinery. Griffiths: “In terms of ink marking complaints, things like blobs, hickeys, etc, – we’ve actually seen a 65% reduction year on year.”

PCP also has a clearer idea of its ongoing costs for each machine, something that is particularly relevant for the older webs. “There will come a point when we’ll have to spend too much on maintaining that productivity, and at that point the business can make a decision and say ‘this asset is now costing us this amount, is it time to start thinking about a new one?’” says Walker.

“And we’ve got the full support of the board and the MD. And that helps if we make requests for funding, because it’s understood that we will deliver and they’ll know that we’ve exhausted every other option.”